“Come up and see my etchings sometime.”

“Come up and see my etchings sometime.” 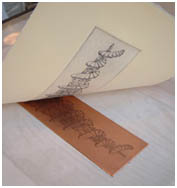 That phrase, originally coined by the artist Louis Icart in 1920’s Paris, has historically represented the original “pick-up line” used by men of ill intention to lure young women to their living quarters.

Sadly, this is where most people’s familiarity with etchings ends.

Well, let’s buck that trend here and now, and give you something smart to talk about at that next cocktail party in the bargain.

In layman’s terms – since we’re all laymen here – an etching is an original piece of Art on paper that an artist creates by “pressing” paper against a metal plate that they have prepared with grooves in the shapes and patterns they hope to later appear on the paper. These grooves act as wells that hold the ink in place, and the ink is thereby transferred to the paper in these same shapes and patterns. Voilà, a new piece of original art is created!

Of course, this is an over-simplified version of an historic medium which is truly a blend of science, technical skill, and artistic vision. For a more detailed look, this short video is a great source, but for today’s purpose suffice it to say that the artist’s use of wax, acid, hand tools, mirror imaging, and a version of the same press used by Rembrandt – images created this way are truly labor intensive gems.

Each print that is “pulled” through the press is an original, and will have unique characteristics that distinguish it from others, but since they are done in multiples ( usually editions of 150 or less ), their price point is lower than other mediums. In our Gallery alone, we carry etchings that sell in the range of $150-$200 by artists whose oil paintings would sell in the thousands.

What a great way to begin a collection that will endure for generations to come. So much of what we use to decorate our homes these days is disposable. Etchings offer us the opportunity to own something that has real value – something original that we can be proud to pass along.